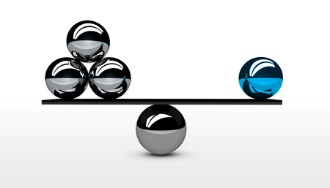 An MSP business is going to have many among its ranks who function better independently than they do as part of a group working toward a solution. However, when you take a step back and examine the entirety of a given operation, it is itself a cohesive unit. Perhaps many parts of that unit operate independently, to an extent, but the result is success for all. So even your most independent workers are themselves part of a team: your organization.

Here is the thing: forcing those who prefer a group setting into an individualized setting, and those who prefer an individualized setting into a collective environment can be bad for operations. Sometimes there must be a crossover, but you need to meter that crossover not with bureaucratic arbitrary decisions, but with strategy.

Consider coding, as a for-instance. Many who work in coding are more apt to be effective on their own. However, you can increase that effectiveness if you facilitate an output competition between other coders. A friendly rivalry can make work more fun, while simultaneously producing better results. It is a win-win scenario. If you want to double-down on this strategy, you may put a team of several coders against another team, and have them awarded an incentive based on the group that performs the best during a given period.

Now, this is only an example of possible individualization and teamwork combined. Your MSP business may not even have coders working in its ranks; though it is hard to imagine any IT agency that does not have employees proficient in this task somewhere among its members. The point is, even the most individualistic employees can be utilized in a team setting if such a thing is strategically approached.

Meanwhile, there are certain groups of individuals who combine aspects of individualization and collectivization together. Salespeople are often of this type. The work itself is individually pursued, but in a collective sense as there are often multiple salespeople on the floor, and they are usually in competition with one another even if they are on the same team.

You want to value the Maverick qualities of individual salespeople who are successful because they are going to solve tough problems. However, you do not want to let them get too “western” with it, as it were. An individual doing well long enough without some monitoring is apt to get delusions of grandeur, which can result in poor decision-making. Sometimes it is good to apply gentle pressure, which prods such individuals toward a team setting.

Finally, you are going to have those who are primarily collectivist in their output. Marketing comes to mind in this regard. Marketing professionals must work as a group toward a concerted end, and always have the bigger picture in clear focus. Because so much depends on the overall outcome, many individuals in this area will have difficulty functioning independently but will be more than happy to function doing a certain task for the greater good of the group.

In order to determine who will be best suited for what task, you need to know your employees well, and ensure that they are in the positions that best suit their needs. Outbound sales will be replete with lone wolves, but you must at the very least confederate them into a team of some variety. Coders are also apt to be individualists, but they should themselves work toward the good of your company. Marketers are going to be more apt to collectivized operations.

Of course, you will have statistically outlying individuals in all three groups who are strangely necessary to those groups regardless of their unique qualities. Some of these should be managers and some of these should handle tasks others do not want to. To see the greatest success, you have to carefully monitor and support your employees so that they are enabled to fully flourish in your MSP business. This may require some practice at first, but the more you consider the overall picture, the better you will be at properly designing individual and teamwork management strategies.

Bill Hogan is President of Partners Plus. A fast growing IT Support firm based in the Philadelphia area. Bill has been helping make life with business computers easier since 1981. His education as an Electrical Engineer at Penn State started a dual approach toward gaining expertise in both programming and computer networks. In 1991 he formed Partners Plus, Inc., to provide managed IT services to companies in the Philadelphia metropolitan area, based on being a business operations ally and understanding the need to speak to company leaders in plain English rather than ‘techno-babble’. And while others tend to focus their attention on the mechanical components of a computer system, Bill and his staff take a more global approach - how a network can be best used as an integral, reliable asset to the business owner’s goals. In 2007, after years of frustration with the sub-standard services he saw during network audits, Bill published “Hassle Free Computer Support” to educate business owners with the information they need to get superior technical support for their businesses A firm believer in keeping current with advances in technology and processes, Bill lead Partners Plus to become a Microsoft Certified Partner in 1998 and a Gold Certified Partner in 2008. And, Partners Plus Inc. has been selected by Microsoft as being in the top 1% of Partners serving the Small and Medium Business Market on the East Coast. Bill is internationally certified in Network Operations and is certified by Microsoft in project management and multiple Microsoft technologies. He also held the position of representative for the Mid-Atlantic region on Microsoft’s Advisory Board which manages all Microsoft Small Business certified partners. Partners Plus provides managed it services to clients in Philadelphia and the Delaware Valley and helps them choose, implement, and manage IT and cloud solutions that are cost effective and reliable. Partners Plus’ pro-active approach to IT support is ideally suited for companies in Wilmington, Delaware or Philadelphia who depend on reliable IT infrastructure, but don’t want to spend a lot of money to keep your IT services in Delaware that way. Partners Plus clients have come to appreciate the Partners Plus team focus on operations and the ability to get the core of problems quickly, and the knowledge of how to resolve issues as quickly as possible. With the institution of the Partners Plus Protection Program, the company can now monitor, identify and resolve many network issues in minutes without coming onsite.