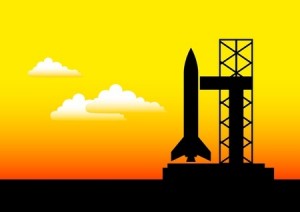 I was working out the other day and saw two updates on CNN that caused me to stop and think about how technology as changed the world.

As I processed the information about Space X my thoughts centered on how some are holding up amazing changes.

I was thinking about how IT provider’s bias are preventing them from marketing the innovative cloud computing.

1.) Privatized Space Travel – The actual update on CNN was that Space X had just tested their reusable rocket and it was successfully able to launch into orbit and return back to the launching pad. It slowly landed vertically in the same position that it had taken off from! This is the single greatest change as the Private sector has accomplished something the government space program never would have done is a million years!

2.) Drone Delivers – The second news flash reported on how Amazon was going to use land based robot droids to deliver packages. Instantly I realized that their innovate technology was going to help them leap past their marketing rivals but at the same time it was going to literally changing the texture of our world.

3.) Electric Cars -When I was thinking about the amazing technology advancements Space X had made I remembered that the founder Elon Musk has also been changing the world with his electric car business called Tesla. Tesla has brought the most innovative technology to the electric car business and made it a reality. In fact, they are working on an version of their electric car that will be affordable to the masses! Even more they have spurred their car manufacturing rivals to all begin offering electric cars as well.

5.) Streaming Video -When I got home from the gym I turned on the TV and started searching Netflix for a good movie to watch and realized that this was just another way technology has changed our world. Netflix’s streaming technology helped put Blockbuster out of business and has changed consumer habits so that they do something called binge-watching TV series. Companies like Netflix, HBO, and Showtime regularly release entire seasons at once which means that consumers have the option to watch the next episode immediately, rather than waiting a week as has been custom for years. This has led to viewers continuously needing to find more TV shows as they rapidly consume entire series online. There is no question that Netflix and other competitors like Amazon Prime have completely change the entertainment industry.

6.) Streaming Music – Of course, while Netflix was making waves with its steaming video Pandora was changing the music world with its ability to stream live music for free, with businesses using it for their stores, using helpful articles like https://cloudcovermusic.com/music-for-business/stream-pandora/ to guide them. Their technology changed consumers’ habits from buying digital music at the Itunes store to just listening for free or subscribing to a music streaming service like Spotify offers. Either way, people enjoy their music has been dramatically changed with technology.

7.) Cloud Computing – The Cloud has made huge strides in 2015 as it has even been capable of running Auto-cad on a cloud desktop and many SMBs have been able to achieve the dream of dumping nearly all their hardware in-exchange for a total cloud service. However, the truth is that the majority of companies still have not embraced the cloud. This technology is not sweeping the nation and making vast in roads like the other technology we discussed. The reason for this is because many of the IT providers simply haven’t done their research to find the most innovative and cost efficient cloud vendors or they stubbornly insist on developing their own cloud software and data-center hardware. These biases have effectively kept the cloud from the mass adoption that it should have otherwise been able to accomplish. Of course, there are a vast number of IT consultants that have just aren’t even marketing cloud services.