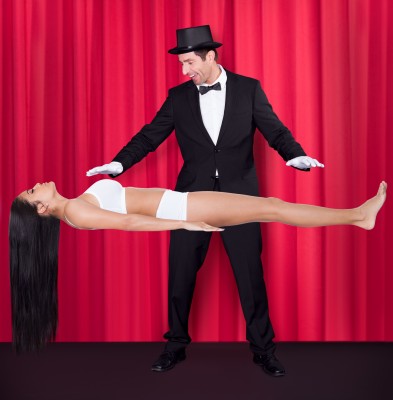 We have been comparing the successful traits of magicians with the skills that computers consultants need when marketing for IT.

One of the things that a great magician never goes on stages without is an attractive on-stage helper.

This is because having a beautiful woman on stage is very distracting and the key to magic is having the ability to distract the audience while you perform the trick.

The question is should computer consultants consider taking a pretty assistant with them on their sales meetings?

Two Heads Are Better Than One

We have long advocated for the need to bring at least two people from your company to these sales meetings and this philosophy also applies to having a pretty assistant.

The idea is that you are showing off how important that prospects is by dedicating the resources of two individuals from your company to attend the IT appointment.

The second person that attends the meeting is better able to take notes, which appeals to your prospects ego, while the main presenter is freed up to focus on just presenting.

This may be a shallow statement but I have observed that beautiful and intelligent women are viewed as a commodity that are associated with success.

I have also witnessed the fact that more often than not the prettier women end up working for successful companies.

This means that if you’re able to have a very pretty or even beautiful assistant work as your sales assistant that you’re projecting success!

Many companies that attend trade shows might have understood the power of having a beautiful women represent their companies but unfortunately too many focus on the sex appeal.

You can tell that these so called both babes often are dressed provocatively and this does turn off many sales prospects.

The other factor to projecting this success is that you have actually employed a beautiful and intelligent women not RENTED them.

This means that your assistant should have a speaking role during the presentation and thoroughly understand your companies services.

Remember that the key to having a beautiful assistant attend sales meetings with you is to project success not sex appeal!

If you try to take short cuts by hiring booth babes then your efforts will often backfire.

When you make every attempt to follow in the path of magicians then you will soon be able turn what invisible into the visible, right before your prospects eyes.