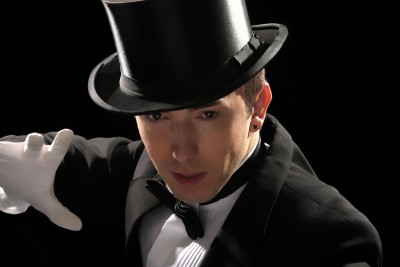 Selling managed services is something that is extremely difficult because you are largely representing an intangible service.

In fact the core issue that if understood correctly could trigger a prospect to take action is more nebulous and difficult to ascertain than unified field theory.

To be successful at IT sales you need to be a Magician capable of making the invisible visible!

To get straight to the point opportunity cost is an intangible concept that is difficult to grasp because it represents hidden cost that do not show up on the bottom line.

Humans are creatures largely governed by their sight!

As many skeptics who doubt arcane concepts often state, “If I can’t see it then I don’t believe it”.

This is the crux of the issue that can become a quagmire which will quickly entangle an inexperience managed services salesman.

Often suspects will literally choke when you quote the price to solve this ‘invisible problem’!

This is where you need to employ the magical arts to make what is invisible appear visible to prospects that have a limited perspective.

The first step in this discovery process begins with finding out who the IT liaison is within their company and the answers will usually be very telling; so make sure you nail down exactly who or how many people are involved.

Once you know exactly who takes care of these issues then you need to get a feel for the IT liaison’s core job responsibilities; other than overseeing IT support.

This is when a clearer picture regarding their true opportunity cost will begin to emerge!

Normally the job functions of the Liaison are of a critical nature to the bottom line of the company.

However be prepared for the prospect, who many times end up being the IT liaison, to become defensive and act as if the IT issues rarely disrupt their productivity.

A Job That Takes No Time?

Now you have to get the prospect to go through some of the task they perform and get them to agree that it does in fact take some time to care for this responsibility.

A good question to ask is who the ‘first responder’ is when employees have issues with their computer support?

Normally this is the IT liaison job so do not be surprised if they admit to taking charge of that area.

What you are doing is painting a word picture that is essentially reducing their argument to absurdity in a very tactful way.

If you can get the subject to admit to a number of tasks that they have to perform as an IT liaison then you simple need to ask the million dollar question.

If you no longer had to be interrupted with any of these tasks, would you be more productive with your core responsibilities?

If you have built up rapport and gone through your questions in a very tactful manner then you should get affirmations from most prospects.

The IT marketing battle from there will still be justifying your cost to make them more productive.

This can be address in another article.