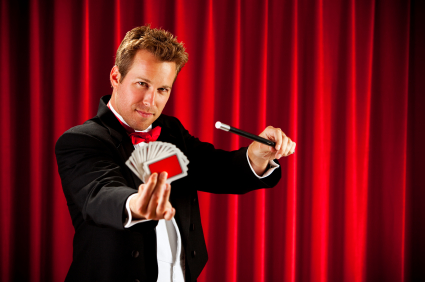 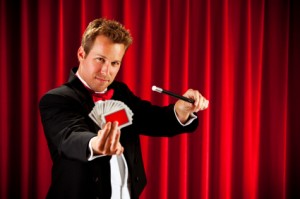 I once heard a famous magician explain to someone that was pestering him for his secrets that if did reveal the secrets to his prestidigitation then they would no longer be amazing.  In fact in the very instant the information would be conveyed suddenly the formerly enraptured audience would consider the tricks very common place and believe they could have figured it out on their own.  Recently I was questioned by a computer consultant that wanted to get some of the secrets we use in our process of telemarketing and sales training.  However,  the same is true with the secrets to IT services marketing as with Magic!  Even the most brilliant technique that is used to get past gatekeepers, once revealed, would suddenly be perceived as mundane and ordinary.

“Just Sit Back And Enjoy The Show”

If you have ever been to a magic show with someone who was more right brained and analytical then you were probably ribbed every few minutes along with them excitedly telling you they think they know how a trick was pulled off.  This constant need to know all the details really ruins the entire experience!  The same is true with IT services marketing, if the computer business owners insists on knowing all the opening lines and rebuttals that the call center is going to employ in their cold calling then it tends to wreck the experience.  Once they know then the luster comes off the benefits of outsourcing IT lead generation and suddenly they feel it can be done in-house.

Of course just because you learn the secret to a magic trick doesn’t mean you will be able to perform it flawlessly the way the magician who has trained and practiced every glance and hand movement his entire life.  This is also true with IT services marketing.  The technology firm probably won’t be able to find people or train them to use the secrets they have learned as skillfully as the Outsourced provider with years of experience.  In this situation no one comes out a winner… once the consultants knows the secrets they won’t pay to outsource and probably will never figure out how to do it successfully in-house.  Just like a person that learned the secrets to the Magic show would never pay to see the show again but neither would they be able to perform the tricks as good themselves.

If you can contract with a marketing company that delivers qualified sales leads which  provide an ROI then just sit back and enjoy the show!  Sometimes it just better not to know something and ignorance is truly bliss!