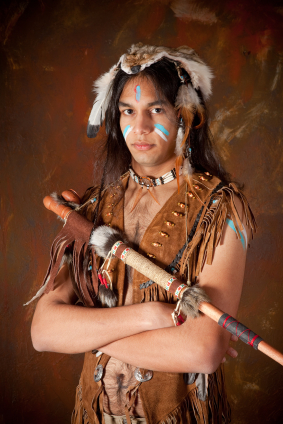 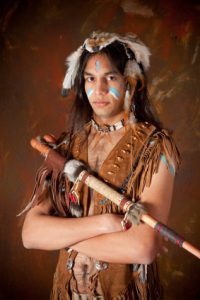 If you have every watched any old cowboy and Indian movies then you have seen that the Indians always put on warpaint before attacking any of their enemies.  As a child the Indians always fascinated me, especially the way they used warpaint in battles.  I always wondered what the importance of the paint was and it’s relevance to battle.  Over the years I have come up with a few theories about what the meaning was behind it’s use.  Are there any benefits that might be applicable in business  if the power of the warpaint was understood?   Now I wonder how the power of ‘warpaint’ might be used by computer business owners in IT marketing.

Should the salesman for computer consulting firms start painting their faces with ‘warpaint’ before heading out on IT sales leads?  Should IT telemarketing agents start marking their faces up with brilliant colors before making hundreds of out-bound calls from an IT call center?  For that matter should we start wearing skins and donning headdresses arrayed with feathers?  Well let’s not get carried away just yet before we try to understand the simple power behind wearing warpaint and deciding if there really is any useable application to business.

When Getting Ready For The Big IT Marketing Meeting, Don’t Forget To Apply ‘War Paint’!

Here is my official disclaimer – the opinions expressed here regarding the use of war paint by American Indians is pure speculation and is not scientific!  However, I believe that one way to look at war paint is that it could have been used as a psychological transformer.  In other words, one minute an Indian is farming or hunting and suddenly he is called on by his tribe to go on a war party.  It would take quite a lot to transition your psyche from farming to becoming a warrior.  I believe that putting on the war paint might have been a way of transitioning into the frame of mind that they were now a warrior and marking a  clear difference between the two.

Another possibility is that while the Indian was wearing their war paint that this allowed them to put on an entire other personality and attribute the acts committed to this other person.  Furthermore, when they took off their war paint they would be able to leave behind their violent actions and transition back to their peaceful idyllic life style.  Some might even say that wearing the war paint might give some the ability to do things that they might normally have trouble doing.  In other words, since it’s not ‘them’ but this alternate person doing certain things then they are able to process their actions with any guilt.

The way this might pertain to business is twofold.  First both telemarketers and sales people that are marketing managed services need to put on the ‘killer’ sales mentality.  The idea behind war paint is that you can perform an action that allows you to transition your mind and focus on the work ahead.  Zig Ziglar had advocated looking into the mirror and claiming your goals and this might be one modern version of putting on war paint.  I am sure that  there are tons of other rituals that might act in the same way that putting on war paint.  The second possible benefit was the confidence that wearing war paint might have given the Indian heading off to war.  Once again a modern version of a transition ritual might have the same benefit to IT services marketing sales people.  Even IT marketing consulting could benefit from getting an extra boast of confidence with their IT lead generation.