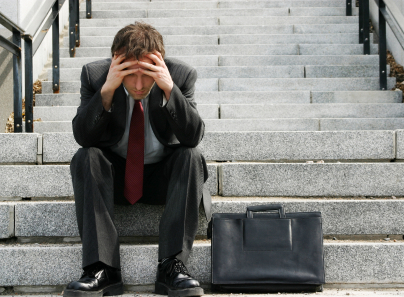 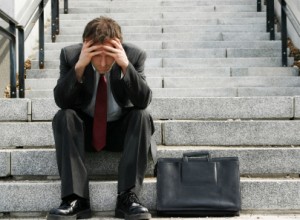 computer business owners who had contacted us and expressed some interest in our marketing services.  We called these companies in advance to set up appointments for me to go by and present how we could provide IT lead generation for them and help increase sales.  When I arrived into town I gave each of these computer services companies a confirm call and then started to map out my driving directions.  When I was grabbing breakfast, I got a call back from the first prospect who notified me he was sick and couldn’t meet, strike one.  Then my next contact called me and said he had been called out to a service visit and wasn’t going to be able to make our meeting either, strike two.   Finally, I drove out to take an advance look at the office on the last remaining lead, when I finally found the address it turned out to be an abandoned building, strike three.  This is when I felt exactly  like the guy in the picture to the right…  Life had handed me total failure on this marketing trip.

Success Is Something You Plan For, Ahead Of Time!

As I was sitting there in my car absorbing the total failure that this trip had become, something happened.  I saw the vision that I had burned in my mind months earlier, that this trip was going to be a success.  It was this vision that got my thoughts turned around and I was determined to reject the failure I had been handed and continue seeking the success I wanted.  The next thing I did was drive to Starbucks and buy three gift cards.  As I was walking back to the car, I told myself, “I’m not leaving this town until I hand these cards to decision makers and give two presentation.”

Next I started looking up computer consultants in the local area and writing down contact information and making some cold calls.  I realized that I probably wasn’t going to get any ‘official’ meetings setup.   Therefore, I determined that if I was able to get the decision maker’s name and verify that they were in the office, then I would just show up and see if I could get an impromptu meeting to discuss technology sales leads.

The first company that seemed to qualify for our IT services marketing program, also told me that I couldn’t speak with the partner in charge but could leave him a voice mail.  After leaving a voice mail I next pulled up his address and headed over to their offices.  After arriving at their offices I waited for someone to greet me.  It turned out to be the same gentleman I spoke with over the phone.  I told him that I wanted to speak with the principal for five minutes and in exchange would give him a gift card.  He disappeared around the corner.  While waiting  for him to return, I was really dreading that I would be rejected, but just in that moment the employee came and announced that the partner would see me and if I could follow him to his office, Home Run!

I used the exact same technique and was able to get another meeting with an IT provider but, this time I had to wait for the owner for about an hour before returning to his office.  When he arrived he took my gift card and said, “There is no way I can throw you out after taking your gift card!” Home Run! I would like to point out that not only did I get to make a presentation about IT sales leads on this last visit, but they turned out to be an ideal candidate for our marketing services.  I also made a good friend and learned some valuable information!  In all I can say that the meetings I got at the last minute were better than anything I had lined up in advance.

Here is where I can pass on some tips from this experience to the managed services providers.  The key to this success happened long before I ever showed up, it happened months earlier when I visualized how successful that trip was going to turn out.  The second element that lead to success was when I made up my mind that I was going to stay there until I had two great meetings and then paid for the gift cards in advance.  With this determination, I was telling life that I wasn’t going anywhere until I got the success I had planned on… it’s only in moments like this that life relents in the face of your determination and hands over success.

Make sure that you have visualized a successful marketing campaign and be determined to hold out for success even when it looks like everything is falling apart!