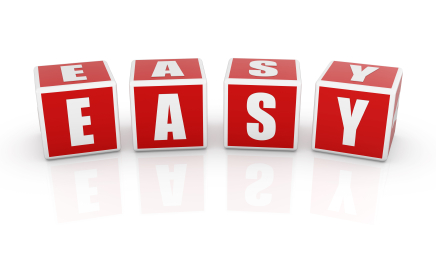 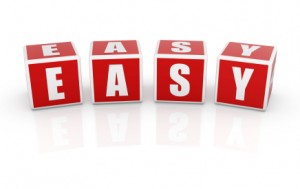 “What if we could save you money?”….  This question has to be the number one question that salesman have used through the ages to try and close prospects.  It’s also been the primary vehicle that most marketing professional have built their sales message around and used to drive revenue.  Granted even when companies say they can’t save you hard cost and that their services will actually cost more, the  rationale is still that you will save money in some other way. Normally companies that can’t show direct savings try to show savings to their prospects soft cost.  Computer business owners have primarily followed the latter path, trying not to show direct hard savings but indirect soft savings such as eliminating lost productivity or increasing productivity.  In the past I have always believed this was the correct path to follow in the marketing process for technology sales.  However, what if there was a way justify buying managed services other than saving money?

Make IT easy and they will see the value!

The alternative to selling managed services came to me quite by accident while I was traveling in Seattle.  I was there visiting one of our clients who had signed up for our limited sales training .  This is something we offer to IT services marketing firms that subscribe to our guaranteed sales program.  While I was there the goal was to observe their sales presentation and attempt to get ‘buy in’ from them on using or 16 point sales plan.  Our IT telemarketing team had set up two appointments for our sales coaching efforts that day and it was on the second appointment where I realized this new rationale for selling managed services.

I joined the owner of this tech firm and his main salesman on the second It sales lead of the day. When we had arrived at their offices the controller of the firm had been expecting us and escorted our party to the conference room.  When the meeting started the owner and the salesman did the proper warm up and then proceeded into discovery.  On this meeting it had been the owner who was going to present and he went through his slides making some great points about his level of services.  Unfortunately, the prospect hadn’t given up any ground and was adamant that he was completely happy with his current consultant.

It was at this point that both of the other two gentleman had looked at me to see if I had anything to add to the conversation that might budge this prospect a little.  I took their Que and then ask him a few question to re-verify that he was paying a flat fee for remote support but per hour for on-site support.  Then double checked his previous statement that he got involved in some of the It support.  Once the prospect confirmed all this, then I proceeded to frame his thought process around saving money as the key reason he got involved in any computer repair.  The issue was that his employees notified him first on any IT issue and then he first tried to fix them….  I was asserting that he did this to save money.  Of course my point was that it was actually costing him more money than he realize in lost productivity and opportunity cost through his effort to minimize the per hour charges from his consultant.

His  reply stunned me, he objected to my insinuation that he based his personal IT involvement around saving money.  Instead he stated that it was all done that way simply out of convenience.  He explained that since he was always notified first then it was just easier for him to do it rather than to go to all the trouble to call the computer consultant out.

I have to admit I was a little shocked, but not thrown off my game entirely… I quickly recovered and saw how I could frame the exact same argument around a new rationale for convenience.  I was determined to dig down deep and really try to reach this prospect so I could make the most out of this one opportunity from of all the other technology sales leads we had provided our client.  I reemphasized the 45 second help desk response time which the owner of the tech firm had stressed in his slide show presentation.   Then I asked him to imagine  hypothetically what it might look like if they adopted our flat rate plan. First I stressed that all his employees would report every IT  issue directly to out help desk [by passing him] and remediation would begin remotely within 45 seconds, then if any on-site work was needed our techs would automatically be dispatched.  I further pointed out that under our plan he wouldn’t even know any of this had gone on, save for a report at the end of the month.  Then I asked him, “Does this sound like it would be more convenient?”

He paused for a minute and agreed that it sounded better.  Now I could see my partners spirits pick up a little bit more and the owner offered a closing statement, “Do you see anything stopping you from moving forward?”  His answer almost made our mouths drop open in shock.  He said he didn’t see anything holding him back.

There you have it, there was no need to abstractly convince him that he was saving money.  All we needed to do was demonstrate that our managed services offering would make his life easier.  If this approach is adopted and used in the right situations then we believe our clients can convert more sales from our IT lead generation.

John Black is the Marketing Director at MSP Telemarketing and has over 10 years’ experience in IT marketing on behalf  of computer consultants and VARs to help them get more IT leads that turn into IT sales!